EDDIE AND THE PALACEADES SAVE THE PALACE is an all original musical comedy.

Eddie and Gracie and Vinny and Isabel met in their teens when they all worked after school jobs at the Palace Theater.  They discovered they all loved music so they started a band.  They got to be pretty good, appearing on American Bandstand, Hullabaloo, the Ed Sullivan Show.  In 1966, they opened for the Beatles  on their last American Tour.  The couples fell in love.  When the girls got pregnant, Eddie declared "a hotel dresser drawer is no crib for a baby".  They gave up their music careers to settle down back in their hometown Waterbury, Connecticut, get 'real' jobs and raise their families.

After 25 years together, Eddie and Gracie still carry a crush for each other, but with daughter Mary grown and moved out, they are empty-nesters trying to decide what to do in their next act.

The Palace Theater, where Eddie and The Palaceades got their start is threatened with demolition and Eddie brings The Palaceades out of retirement to play a fund-raising Save the Palace Concert.

When this "let's put on a show" effort fails, Eddie decides his next act is to fight the pay to play politics and run for mayor to save the Palace Theater.  Thrilled by the applause at the Palace, Gracie would prefer to reboot their musical career and go back on tour.  Separate ambitions and some bad behavior on Eddie's part lead to a break up that threatens their marriage, friendships and family.

It’s a roller coaster ride of emotional moments with endearing songs to make you sing and dance, and a crew of corrupt politicians who will make you laugh till you cry. 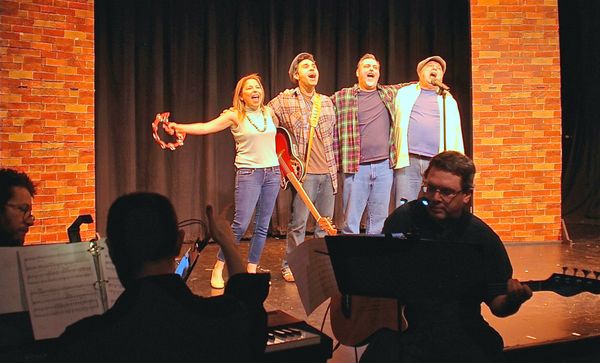 "THE SHOW HITS THE RIGHT NOTES WHEN IT COMES TO ITS HEARTFELT EXPRESSION OF LOVE, FRIENDSHIP AND THE THINGS WORTH FIGHTING FOR."

at the Square Foot Theatre Company
in Wallingford, CT where it attracted sold out audiences
CONNECTICUT QUOTES

“WE REALLY FELL IN LOVE WITH THE STORY OF EDDIE AND THE PALACEADES" -  Patrick Laffin, Director and Co-Founder Square Foot Theatre Company

"EVERYONE HAD FUN AT EDDIE AND THE PALACEADES". – Carol de Giere, author ‘Defying Gravity’ and ‘The Godspell Experience’

“I ENJOYED THE SHOW! AND IT HAS A BIGGER MESSAGE THAN JUST WATERBURY.” – Frank Tavera, CEO Palace Theater, Waterbury

“THE SHOW IS GOOD. IT HAS REAL SOUL AND INTEREST..IT HAS SOMETHING TO SAY AND SAYS IT WELL.” - Attorney

“WHAT I LIKED THE MOST WERE THE ACCURACY AND SPECIFICITY OF THE SCRIPT. THE CRAZY DEVELOPMENT PROPOSAL, THE VARIOUS LOCAL AGENCIES, THE THICK REPORTS ALL RANG TRUE. AND SINGING ABOUT THIS STUFF WAS EXTREMELY FUNNY.” - Planning Commissioner

WHAT PEOPLE ARE SAYING ABOUT THE MUSIC

"I LIKED THE MUSIC VERY MUCH."

"I FOUND MY EYES WELLED UP WITH TEARS FROM THE HEART-TOUCHING SONG I MISS MY WIFE."

"CATCHY TUNES LIKE MEET ME AT THE PALACE, WRITE ABOUT THAT, AND C'MON EDDIE YOU CAN DO IT GET THE CROWD CLAPPING, CHUCKLING, AND NODDING THEIR HEADS."

" WRITE ABOUT THAT - A REALLY FUN SONG.  INJUNCTION -FUN EXCITING NUMBER.  BANGARANG - ANOTHER GREAT GROOVE, SOUNDS CONVINCINGLY LIKE SOMETHING THAT WOULD HAVE BEEN A HIT.  PAY TO PLAY - THIS IS A REAL MUSICAL THEATER SONG, WORKS GREAT."